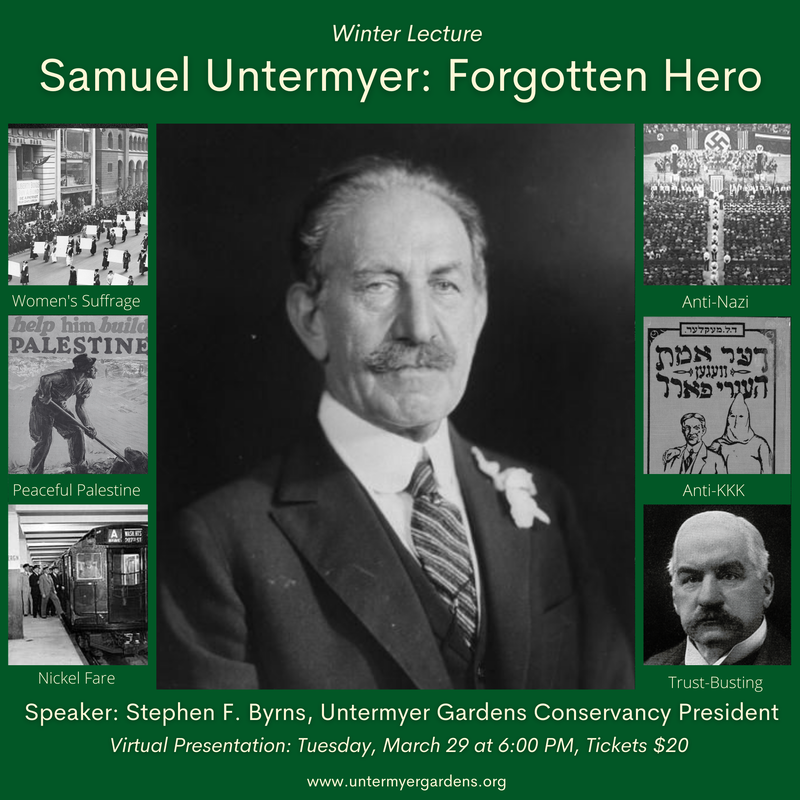 Samuel Untermyer (1858-1940) was a member of New York’s German-Jewish elite. A brilliant lawyer and investor, he was also a leading progressive figure in the last thirty years of his life and an advocate for some of the major causes of the 20th century.

Against this backdrop, Untermyer had another passionate interest: his 150-acre estate above the Hudson River in Yonkers where he sought to create the finest garden in the world with the help of William Welles Bosworth, who had designed the gardens at Kykuit, the Rockefeller family estate. The lecture will conclude with images of the garden’s evolution—from its heyday in the 1920s and 30s, its descent into ruin in the 1960s and 70s, and its spectacular restoration by the Conservancy, which has revived interest in the historical figure of Samuel Untermyer.
Thank you for making the 2022 Virtual Symposium a success!
If you missed our virtual symposium, The Making of a Meadow, you can now register to watch the Zoom recording. Click the image below to register. After you purchase a ticket, we will email you a link to the on-demand webinar, which will then take you directly to the recording. 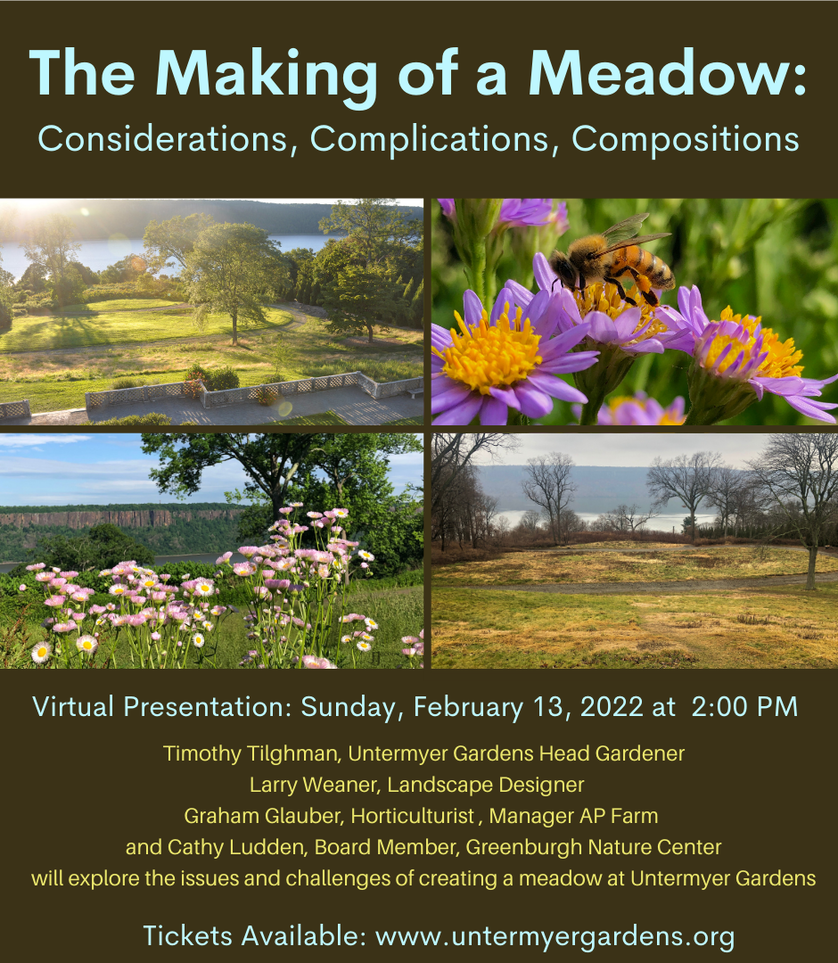 Larry Weaner has been creating native landscapes since 1982 combining expertise in horticulture, environmental science, and the traditions of garden design. He received his Associates degree in Ornamental Horticulture from Pennsylvania College of Technology. He founded Larry Weaner Landscape Associates, a nationally-recognized firm providing landscape design and restoration services for private residences, businesses, and public facilities in over 20 states and the U.K. With its emphasis on establishment of native plant communities and invasive species management, his work has been profiled by regional and national publications, including The New York Times. In 2008 he received the top three design awards from the Association of Professional Landscape Designers and the Landscape Design Honor Award from the Perennial Plant Association. He actively lectures for horticultural, environmental, and design organizations throughout the U.S. including the New York Botanical Garden, the Garden Writers Association, and state chapters of the American Society of Landscape Architects. He developed New Directions in the American Landscape, a conference series established in 1990 and dedicated to advancing the art and science of natural landscape creation and restoration. He also composes music. Native Perennials.

Graham E. Glauber is a passionate plantsman, and loves a good meadow! Raised in Northern Westchester, he has worked in many areas of the green industry including nursery sales, landscape design and construction, estate horticulture and private consultation. He received his B.S. in Sustainable Landscape Horticulture from the University of Vermont, and has taught several classes at the New York Botanical Garden. In addition to his participation with several local landscape boards and volunteer work as a fire chief in Bedford, he currently serves as the Estate Manager overseeing all horticulture operations at AP Farm in Cross River, New York. There, he has helped to develop, implement and maintain many acres of meadows over the last seven years.

Cathy Ludden is a member and past-President of the Board of Directors of the Greenburgh Nature Center, where she has led initiatives to add native plant gardens, including a 2-acre meadow, to that 33-acre preserve in Southern Westchester County, New York. She is on the Steering Committee of the Native Plant Center at Westchester Community College and a member of the Garden Club of Irvington-on-Hudson. A former Wall Street lawyer, she is now a frequent speaker on native plants of the Northeastern US and has been consulting, designing, and planting pollinator gardens and meadows for the past decade. She is also writing a weekly blog about native plants for the Greenburgh Nature Center’s website called “Around the Grounds.”

​Symposium Q&A.
The Untermyer Gardens Conservancy hosts a Winter Lecture and a Symposium each year.
Google+