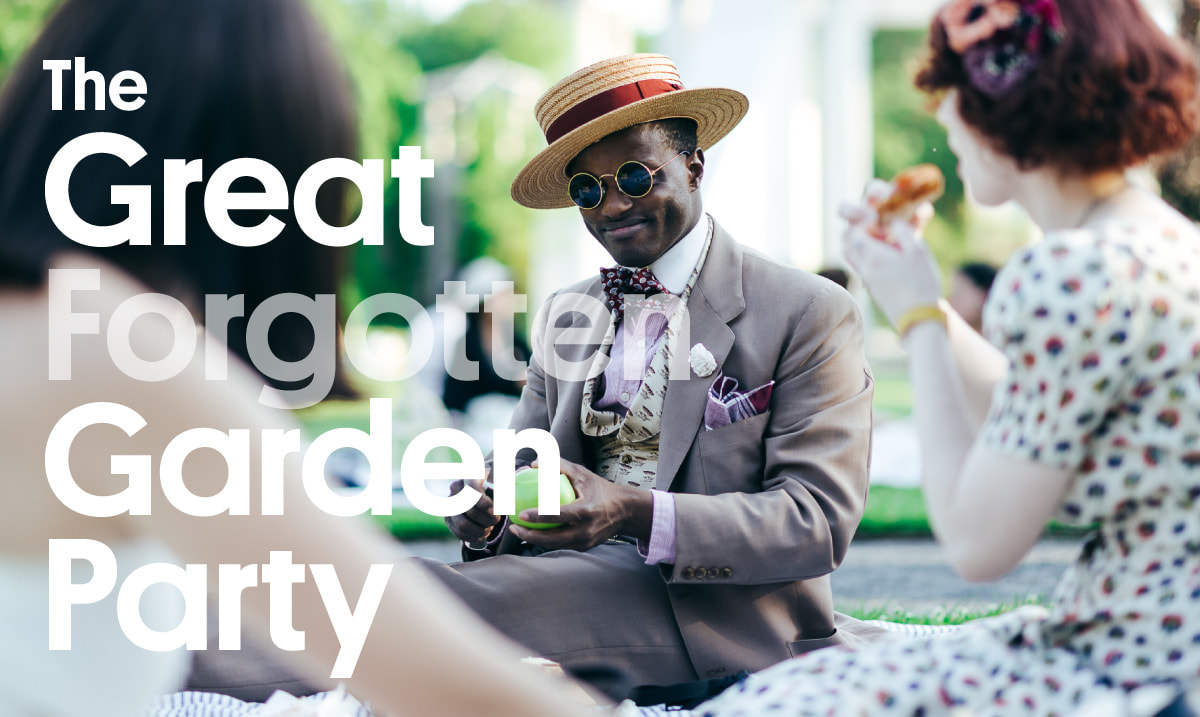 Atlas Obscura's paramount summertime event: An extravagant outdoor gala celebrating the beauty, history, and mythos of America's Greatest Forgotten Garden.
Hidden behind a great stone wall overlooking the Hudson River resides a masterpiece of unspoken beauty. Statues of sphinxes tower from beyond the embarkment, crumbling tiles line the remembrance of an elaborate mosaic pool, and 2,000-year-old imported Roman columns frame a dramatic view of the Palisades.

For the third year in a row, join Atlas Obscura and the Untermyer Gardens Conservancy to experience the wonder and beauty of Untermyer Gardens. In this enthralling evening filled with exploration and performance, you'll enter a hidden world of wonder and beauty inspired by the gardens' architecture, design, history, and lore. Brought to you by the curators behind Into the Veil, The Great Forgotten Garden Party invokes the past in this hidden garden oasis, revealing a world of music and dance where ancient mythology and modern legends entwine.
Attendees will find themselves transported back to the golden years of the Greystone Estate, when Mrs. Minnie Untermyer hosted some of the greatest artists and performers of the early 20th century and Samuel Untermyer roamed the property with a white orchid in his lapel. When Untermyer passed in 1940, the daunting cost of upkeep left his former gardens unmaintained, eventually falling into ruin. Victim to vandalism and overgrowth, by the mid-1970s Untermyer Park had gained a dark reputation as a gathering place for occult activities. In the nearly 50 years since, the gardens have been revitalized and restored by the conservancy and open to the public for in-depth tours and events.

PERFORMANCE HIGHLIGHTS
Live performances will take place throughout the night, including sets by headlining artists Armen Ra & Mr Twin Sister.
The mesmerizing style of theremin virtuoso Armen Ra has garnered the admiration of fans around the world, making him widely considered one of the finest thereminists alive. Armen Ra began to study the theremin in 2001, and later that year shared the stage with Antony and The Johnsons for his debut performance. He has since toured with Nick Cave, recorded with Selena Gomez and Gwen Stefani, and performed all over the world, in venues ranging from CBGB's to the United Nations, and Disney's Concert Hall. For The Great Forgotten Garden Party, Armen Ra has compiled a very special set inspired by the beauty and history of Untermyer Gardens

Mr Twin Sister (formerly known as Twin Sister) creates groove-oriented psychedelic music with notes of disco, nu-wave & house. Their 2014 self-titled album was recognized as one of the best albums of the year by Pitchfork, Gorilla vs Bear, New York Magazine, Time Magazine, Huffington Post, and many others. The long-anticipated follow up album Salt was released at the end of 2018, to an enthusiastic response. Atlas Obscura is thrilled to be featuring Mr Twin Sister as a headlining artist at the year's Great Forgotten Garden Party.

WHERE, WHEN and HOW MUCH


FOOD & DRINK
GETTING THERE
Take the MetroNorth to Yonkers Station.
Complimentary shuttle bus service will be provided between Yonkers Station and Untermyer Gardens throughout the evening.